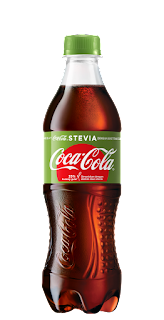 Coca-Cola Malaysia has introduced Coca-Cola Stevia, a lower-sugar cola sweetened from natural sources, yet delivers the same great taste you would expect from Coca-Cola classic but with 35% less sugar. Coca-Cola Stevia sweetened with a combination of sugar and the natural sweetness of Stevia is available at 7 Eleven outlets and all major retailers nationwide. It is the latest addition to the Coca-Cola family which currently includes Coca-Cola Classic, Coca-Cola Light, Coca-Cola Zero Sugar and Coke Vanilla.


Stevia, a no-calorie sweetener is derived from the leaf of the stevia plant which is from the chrysanthemum family, a unique source of intense, natural sweetness. With the addition of Coca-Cola Stevia to the Coca-Cola family in Malaysia, there is now a Coca-Cola for everyone.


Pick up a bottle of Coca-Cola Stevia today and enjoy a great tasting soft drink that is lower in sugar and sweetened from natural sources.
Posted by elanakhong at 10:29 PM