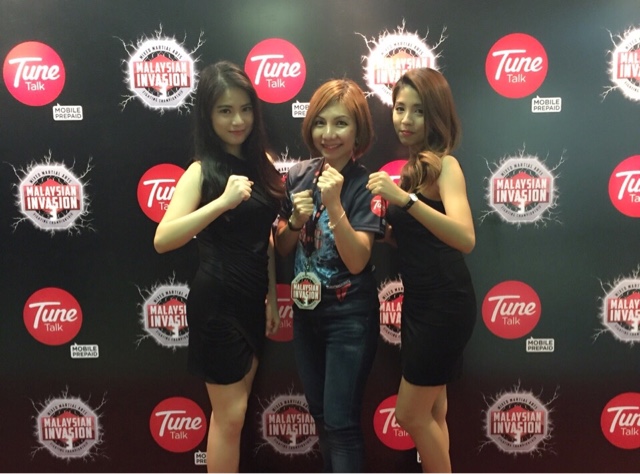 
For the first time ever in South East Asia, there is a crowning of Malaysia’s first Women’s MMA Champion. Two Champions from MIMMA Season 2 also managed to defend their title successfully. Darren Low and Seah Zhang Yu are the largest and smallest competitors in the organization and both remained champions after Darren defeated his opponent via a Round 1, 13 seconds Technical Knockout while Seah went on a 5-round battle winning a decision with all 3 judges awarding the win to him. A total of 6 new Malaysian Invasion Champions were crowned too.

MIMMA 3 is also a part of Hari Sukan Negara(National Sport Day), an initiative by the Ministry of Youth and Sports lead by YB Khairy Jamaluddin and it has been inducted in the Malaysia Book of Records for “The Most Number of Simultaneously Sport Activities in a Day”. The certificate of recognition was  being awarded in the MIMMA cage. 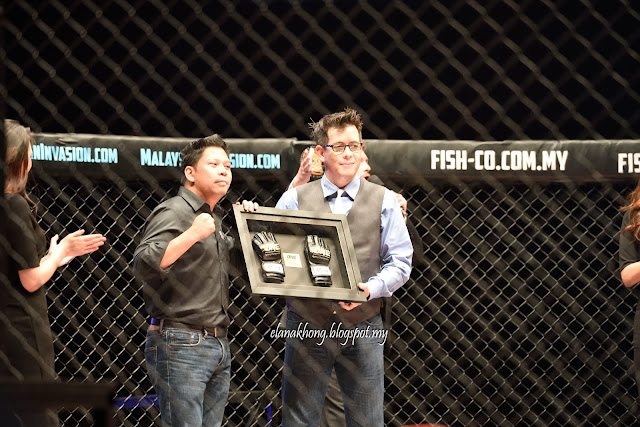 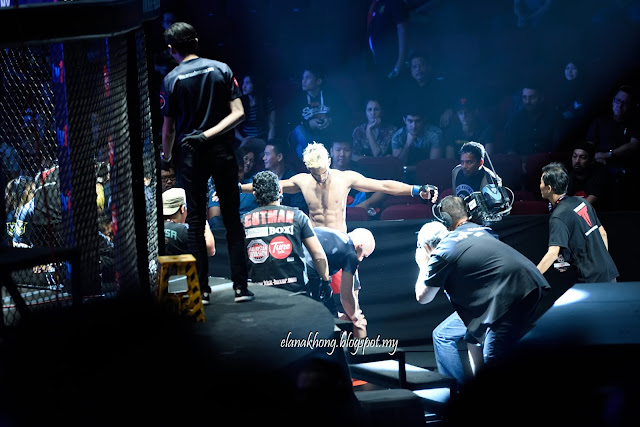 MIMMA Pat Down Inspector performing equipment check and application of Vaseline to the fighter before entering the cage.
And girls, stop drooling at his six pack abs! Geezz.... 😁

Theeban Govindasamy vs Adrian Tham (East vs West)
Govindasamy is a karate expert with an amateur record of 3-2. Tham is a BJJ fighter, fighting out of Sabah.  He was the MIMMA Season 1 Heavyweight champion and the current Welterweight defending champion. Tham's experience and skills on the ground was quite obvious throughout the fight and he gained cage control with them but Govindasamy's striking skills cannot be dismissed. These skills, leveraging his height advantage, his quick transitions on the ground and his takedown defence were commendable. 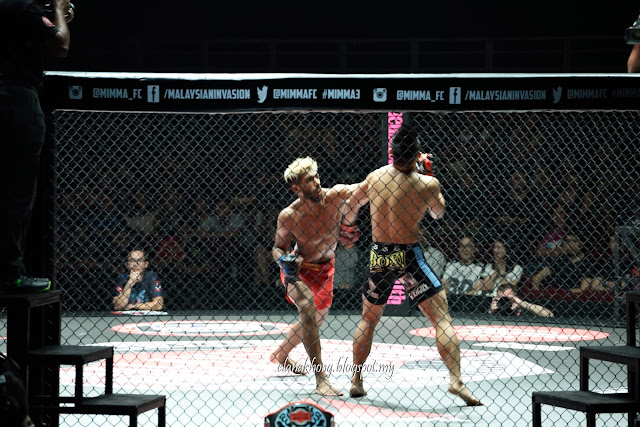 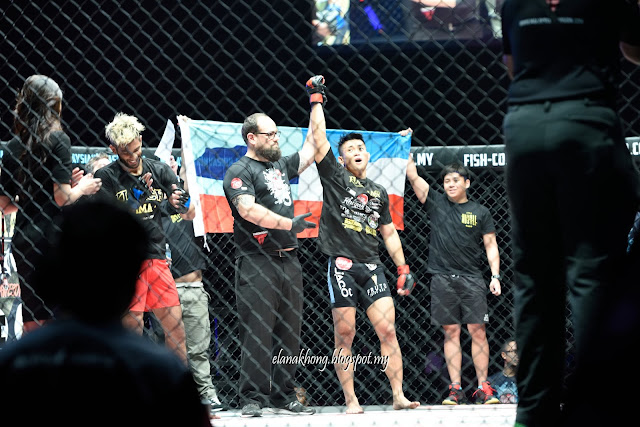 Both fighters are well known for being striking experts. Nazri came from a background in fencing and muay thai while Keng Fai is a boxer. It begins with a very back and forth striking match between the Malaysian and Singaporean. Nazri shoots for a takedown and landed it successfully. Keng Fai stood back up almost immediately. Nazri shot again. Keng Fai reverses to a top position and continued with a dominating ground and pound which transitioned into a guillotine. Nazri stood back up with the guillotine still in. Keng Fai completes the submission and Nazri taps. 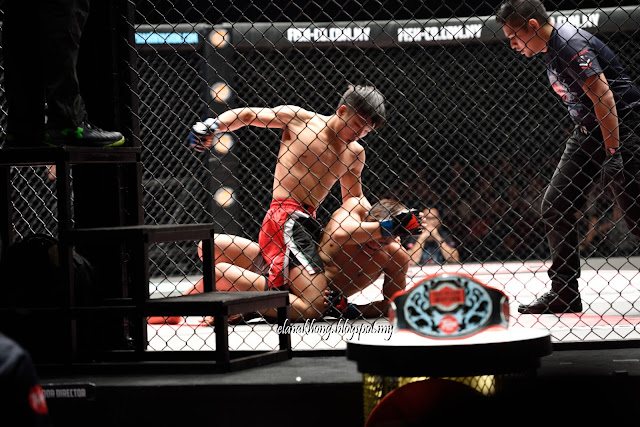 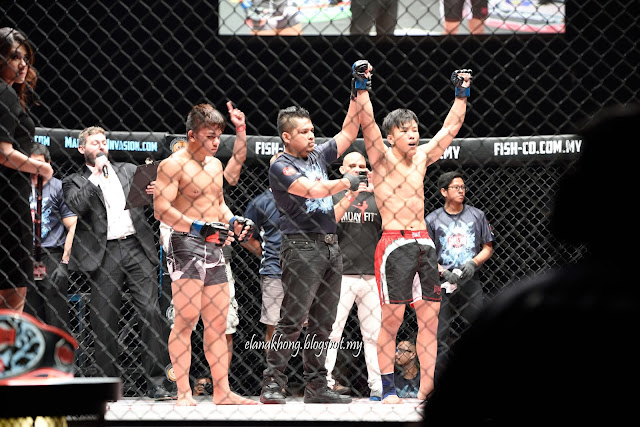 
Celebrity Match: Arnold Loh (Hitz Morning crew) vs Ryan Matjeraie (Hitz Night Out)
Both fighters are very popular for throwing words around but last night they learned a different meaning to the word hits. Not to be underestimated, they traded leather in a fairly balanced match. A very intense 3rd round with a hint of comical energy which lead to the judges’ decision. One of the entertaining fight. :p 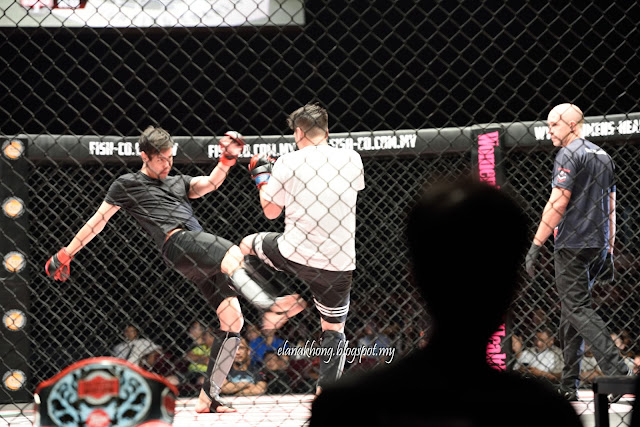 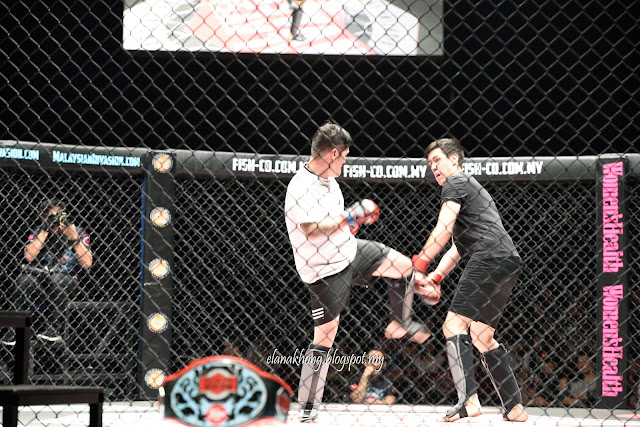 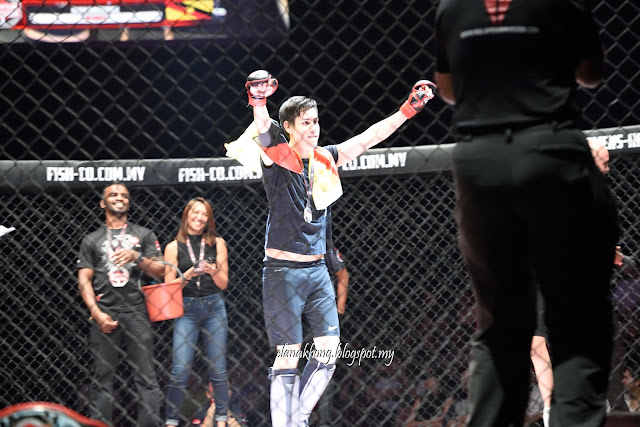 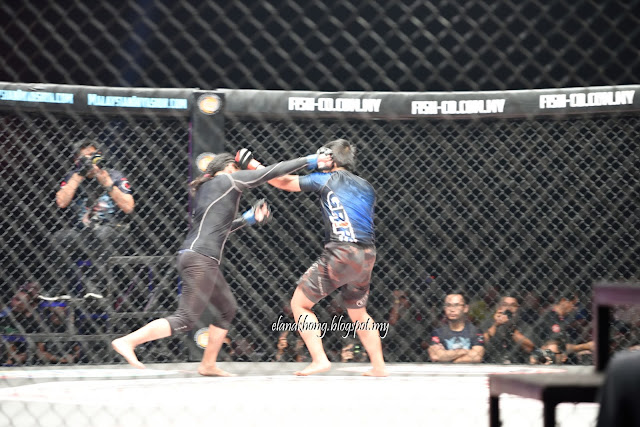 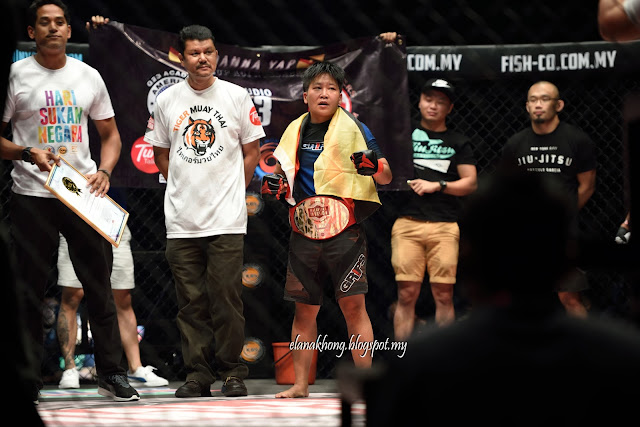 Joanna Yap Vs Felicia Yunus (Malaysia’s First Female Championship)
Fighting out of established BJJ camps, Felicia and Joanna both took the fight to the ground with Joanna using her strength to overpower Felicia throughout the match. Felicia fought back with a number of strikes but did not manage to weaken Joanna. The fight went all the way to the end.
Women’s Pride : Joanna Yap (Sarawak) def. Felicia Yunus (Sabah) via Unanimous Decision
Joanna Yap is now first Malaysian Invasion Women’s Champion! So proud of her. 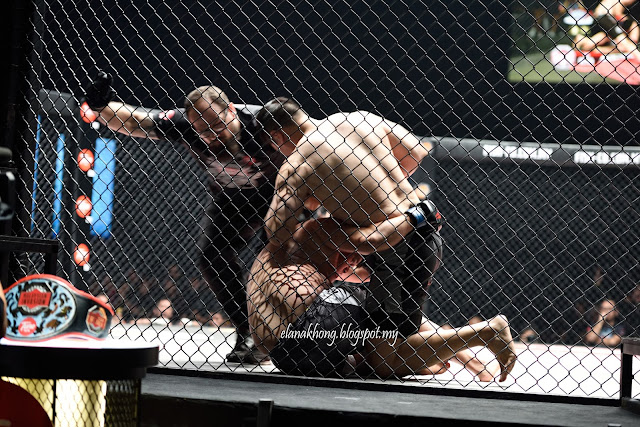 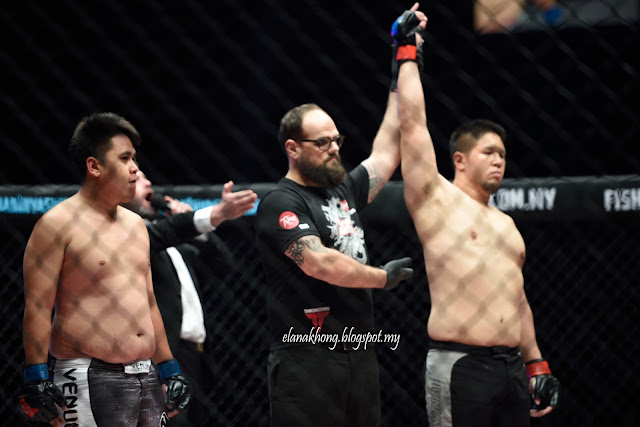 Darren Low, current champion Vs Niker Tan (Heavyweight Championship)
The Kraken didn't take long to finish the fight. 13 seconds in with a 1-2 combo and Niker Tan is out! He won by submission and this year via KO. A very balanced figther, Darren is still the Malaysian Invasion Mixed Martial Arts Heavyweight Champion. 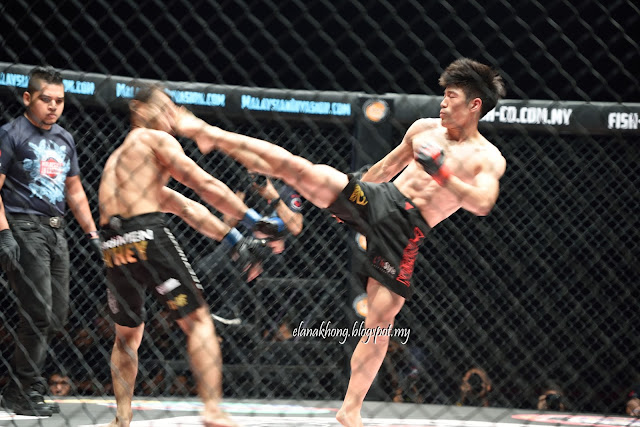 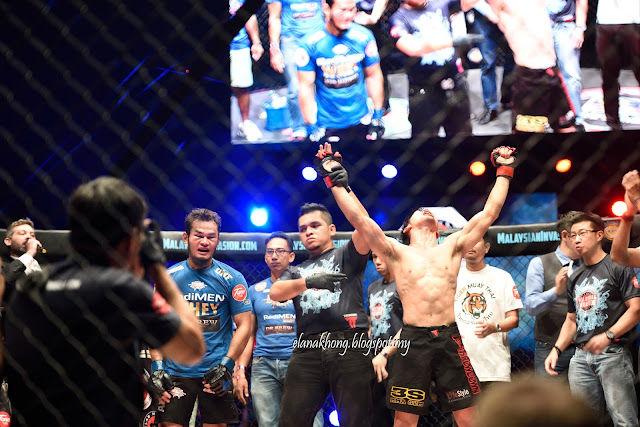 Seah Zhang Yu, current champion vs Dhiaaul Amal (Flyweight Championship)
The lightest weigh division does not mean they should be taken lightly. Dhiaaul and Zhang Yu proves that both of them are the best flyweight in Malaysia. Round by round, exchanging blows and punches. The game changer came in Round 3 as dhiaaul was dazed by a hard jab to the jaw. One of the best fight of the night, IMO. Congrats, Zhang Yu, you got a fan here! :p
Flyweight          : Seah Zhang Yu (Penang) def. Dhiaaul Amal (KL) via Unanimous Decision
Seah Zhang Yu remains the Malaysian Invasion Flyweight Champion 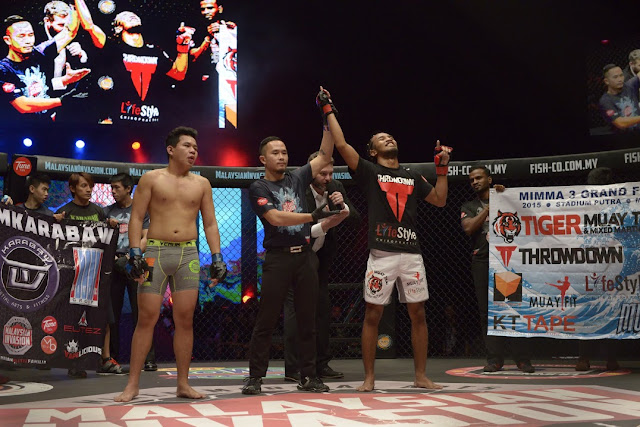 Muhammad Aiman Vs Hafizul Hakim (Featherweight Championship)
Aiman came in guns blazing taking over the fight completely. Hafizul was defenseless when Aiman took his back and executed ground and pound from the back. Hafizul tapped out due to ground strikes. 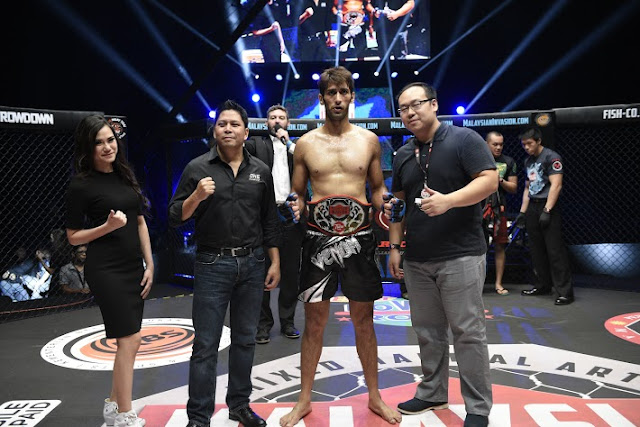 Meeraj Omar VS Syafiq Jamal (Middleweight Championship)
Meeraj and Syafiq both started trading strikes until Syafiq shot for a takedown. Meeraj reversed and caught Syafiq in a dominating ground and pound, stopping the Showtimer early in the first round. 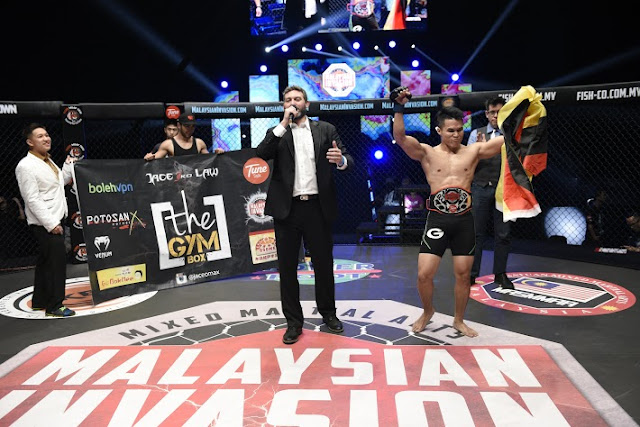 Muhd Hasrul, current champion VS Jace Law (Lightweight Championship)
Both fighters started out taking their time to feel out their opponent because both are known for their knockout power. But Jace had the upper hand when he landed the JKO on Hasrul, finishing the fight. A new Champion rises. His name is JKO. 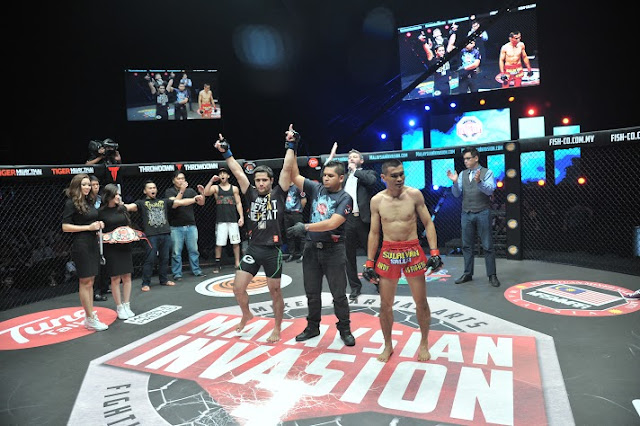 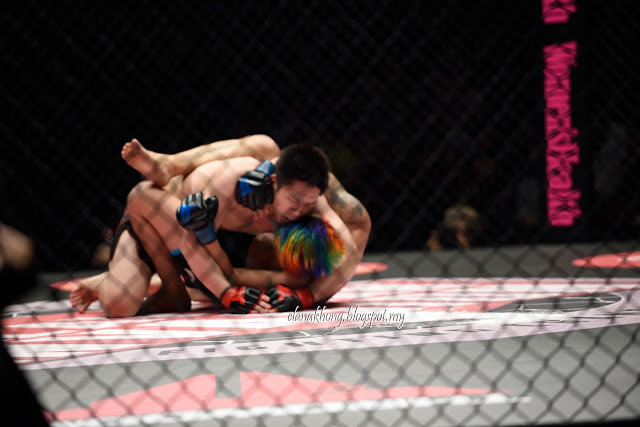 Melvin Kho vs Gino Tan (Welterweight Championship)
Both men wrestled for 3 rounds straight with advantages switching from one to another. Gino started dominating in the 4th and found an opening to initiate a Kimura arm lock that finishes the fight.
Welterweight  : Gino Tan (Penang) def. Melvin Kho (Sarawak) via Submission (Kimura) R4 2:08
Gino Tan is the new Malaysian Invasion Welterweight Champion! 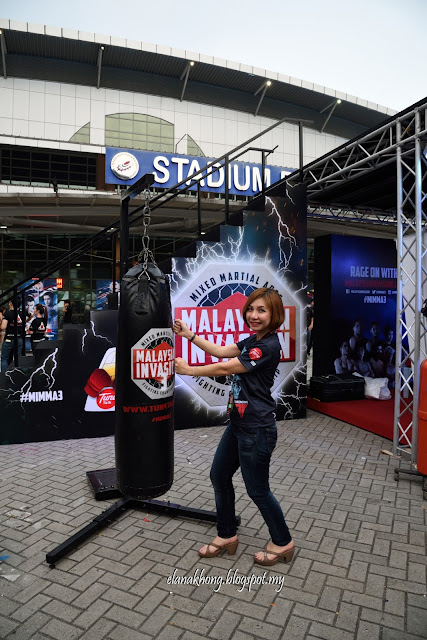 In the meantime, let me train harder, maybe I could join MIMMA4? :p
Nevertheless, it is truly a mind-blowing experiencing live MIMMA, thank you Tune Talk and the rest of the sponsors.

For the first time in history, the MIMMA 3 Grand Finals was shown live on a free network RTM 1 (Astro Ch101). In case you missed it, all previous shows for Malaysian Invasion Season 3 can be viewed for free at www.malaysianinvasion.com

Posted by elanakhong at 8:09 AM