The "Perdana Trail : A Heritage & Historical Walk" officially launched on 9th May 2015 at the lovely poolside of the Hotel Perdana, Kota Bharu. The event started at 8pm and upon registration, we are given a shawl to cover our head. This shawl is not the usual shawl you see Malay women wear on a daily basis. Instead, Hotel Perdana Kota Bharu gave us a simple, kampung-style shawl that traditional fishermen's wives wear when they do chores. It was jus like living in a traditional kampung by the sea. 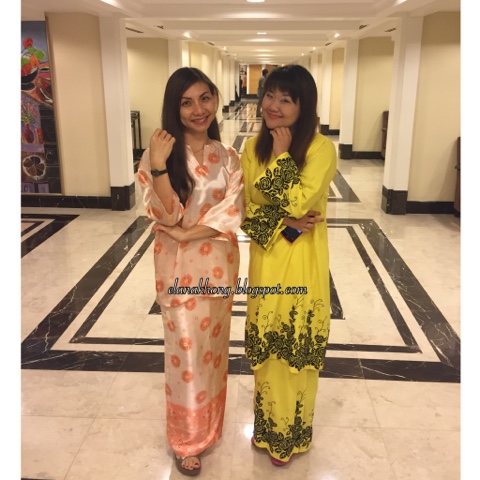 My roommate, Wendy and I wore baju kurung that night. Wendy bought her baju kurung earlier from the Tok Guru Bazaar when we sneaked out earlier. I was wearing baju kurung that I've had for quite some time. So glad that I was still able to fit into the baju kurung. Hahaha..... Life has been kind to me! Thank you! :p 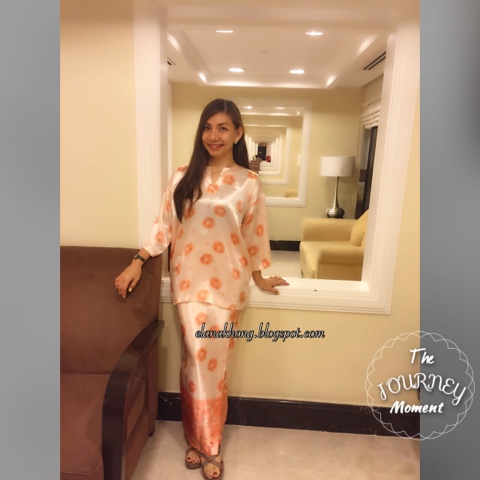 Yes! I have countless of pictures at this amazing mirror effect corner. Such a beautiful and interesting spot for picture opportunities! 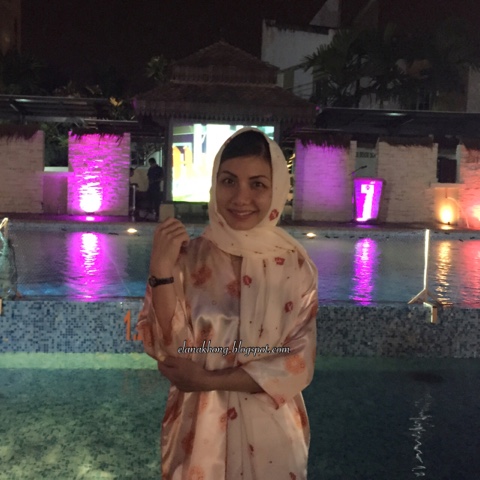 If I had been a traditional fisherman's wife, this is how I'd look! 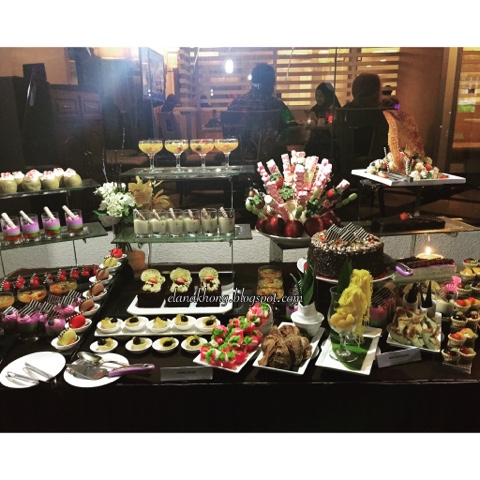 As usual, Hotel Perdana Kota Bharu never fail to serve us the most delicious of food. Upon entering the venue, we are greeted with this selection of pretty looking desserts. Gosh.... Talk about temptation! 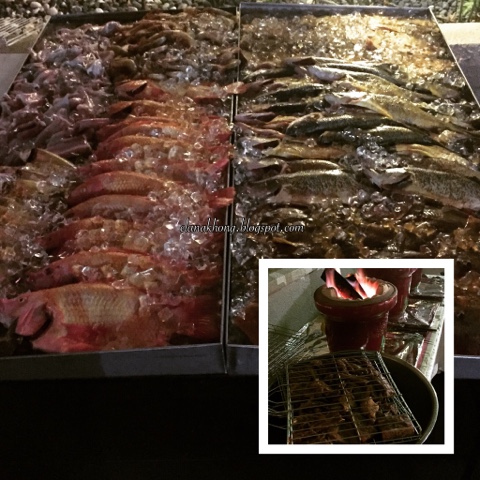 Next what attracts me most is the grill section. Wow.... Fresh fishes, squids, huge prawns and so much more. The seafood galore was simply amazing. 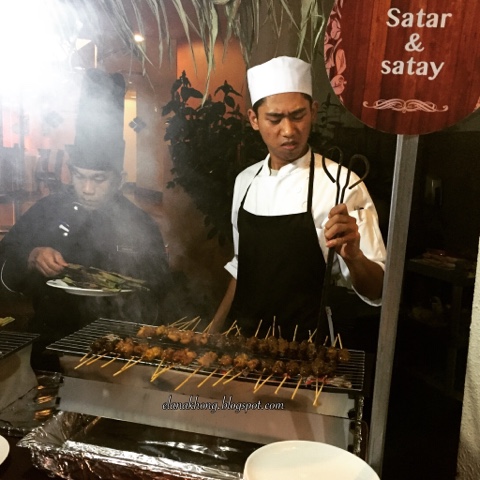 Satar - Made of fish, ginger and chilli wrapped with banana leaves in a pyramid shaped. This is a traditional 'minum petang'(tea time) menu in the East Coast. Think of it as having currypuffs and kuih lapis in Kuala Lumpur as you enjoy a cup of hot tea later in the afternoon. 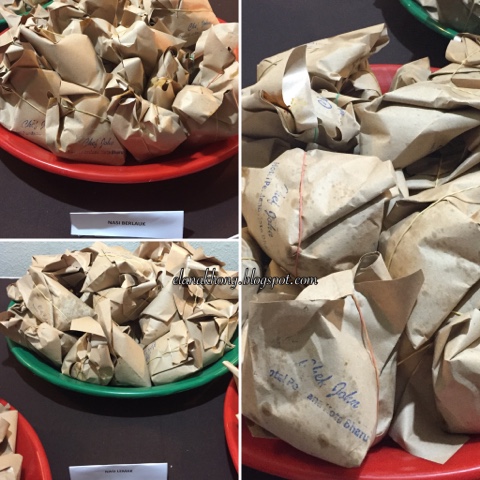 Of course the mandatory, nasi bungkus.

Single serving of prepacked Nasi Lemak & Nasi Lauk. Yes, we were served 'nasi' from the first meal at breakfast to dinner. 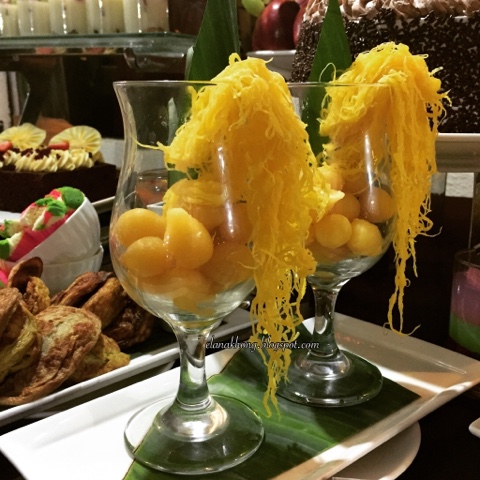 Jala Emas, Kelantanese delicacy used to be served only by the Royal family. Despite its multi-strand look, similar to that of kuih cakar ayam or the roti jala, it actually very simple to make. The ingredients are only duck egg yolk and sugar syrup. Duck egg yolk gives it a more golden yellow colour as compared to chicken egg yolk, your jala emas might appear slightly pale. 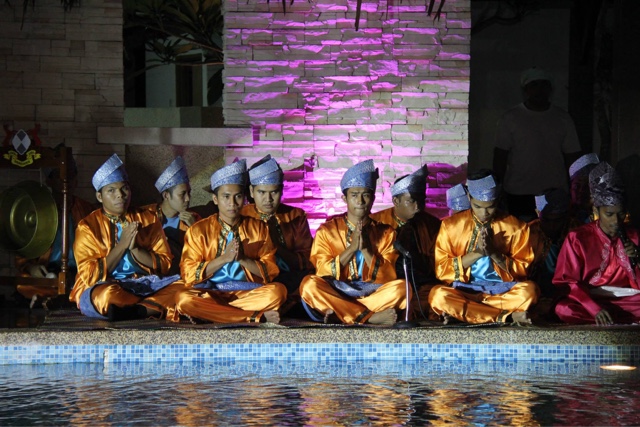 The official launch kicked-off with a 'Dikir Barat' performed by the Hotel Perdana staff. Dikir Barat is so synonymous among the Kelantanese, the lead singer is called 'Tukang Karut'. Usually, he sings using phrases that rhymes, almost like a Malay pantun and the dikir group will follow. This performance is also known for its agile upper body movement. Clapping and swinging waist up had never look so entertaining. 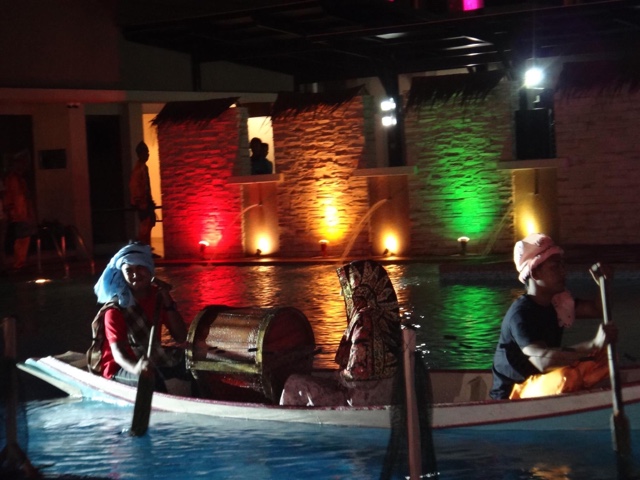 A 'small sampan' then transported a treasure chest to the stage, to officiate the launch. Now we know why we were told that the swimming pool was closed at 5pm. Usually they close at 7pm. We were also told that this sampan was actually rented from a fisherman. Wow! We were impressed with Hotel Perdana Kota Bharu's effort to organize this event. 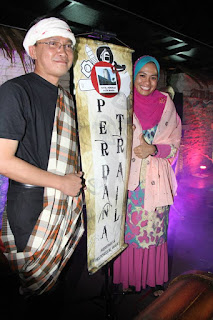 What's inside of the treasure chest?
The bunting of Perdana Trail!
Yay! Perdana Trail is officially launched! 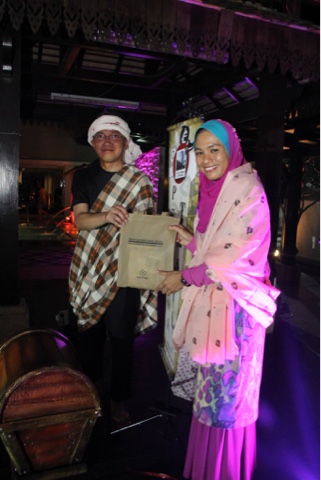 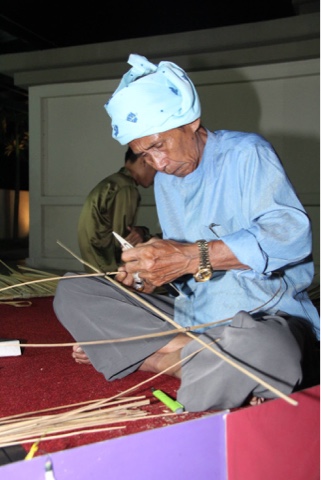 This Pak Cik has been making 'Wau'(Malaysia Traditional Kite) for more than 30 years.
There's lots of hard work involves in making a wau. You'll need to split and soak the bamboo in mud for two weeks to prevent the bamboo from being attacked by weevils and to give it more flexibility. The completed lightweight frame needs to be tested to make sure the kite is structurally sound. This enabled the kite to fly higher when the wind blows. Rice paper cut into patterns will be glued on piece by piece to form detailed and special motifs. 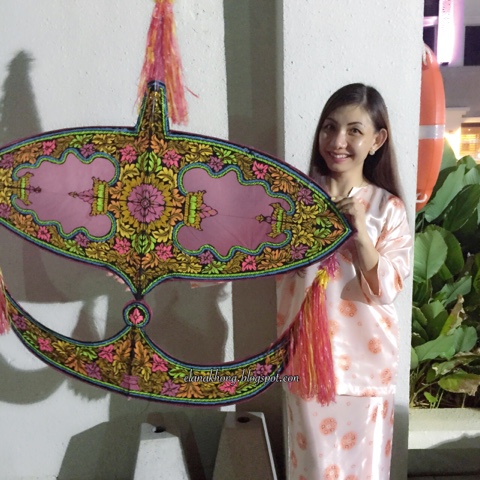 What a lovely 'Wau Bulan' with stunning floral motifs. I'm so tempted to bring it home!
Wau Bulan(Crescent Kite) famous for its crescent-shaped tailpiece, usually measured 2.5 metres wing span and 3.5 metres height. So ever wondered what make a good kite?

"A good kite is one that rises quickly and remains flying, no matter what the whims of the wind may be" 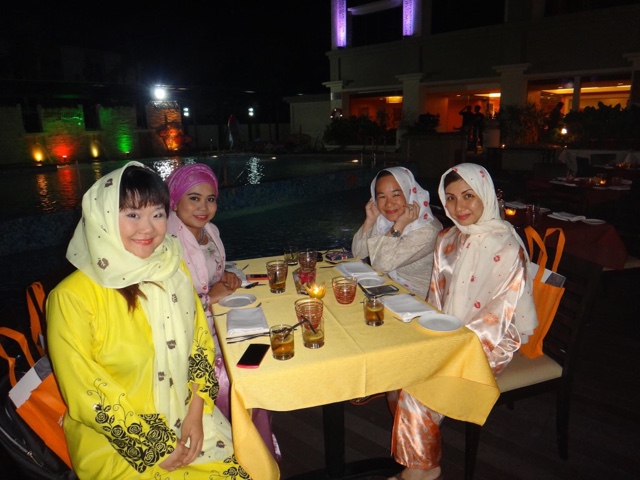 All of us looking lovely with our shawl, ready to enjoy our scrumptious dinner. 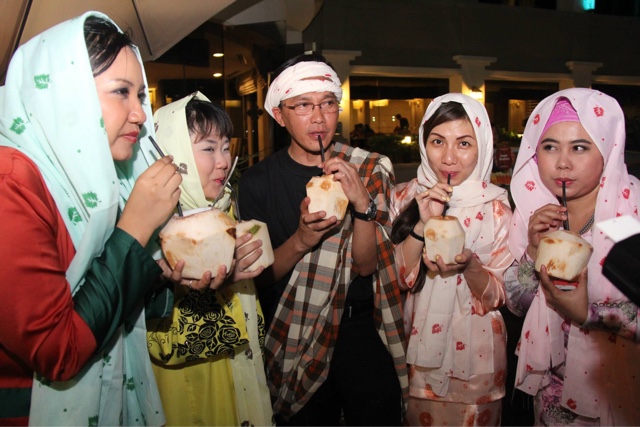 Pic credit Hotel Perdana, Kota Bharu.
We then ended our dinner with a refreshing coconut drinks. 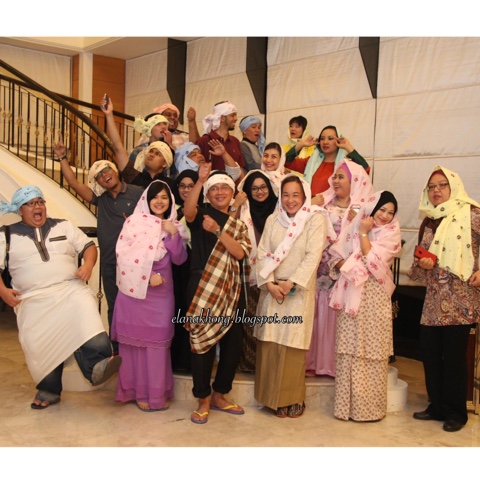 
It was an unforgettable and lovely night with these adorable bunch of friends and personnel from Hotel Perdana Kota Bharu including En Taha, the General Manager.

Congrats to Hotel Perdana, Kota Bharu for initiating the 'Perdana Trail' to allow its guests to learn more of the local attractions and interests.

So the next time you visit Kota Bharu, don't forget to book your stay with Hotel Perdana and the sign up to join the interesting 'Perdana Trail'. Thank you, Destination Malaysia by TM Info-Media for the opportunity.

Posted by elanakhong at 7:29 AM