ESL One Genting returns to Malaysia as official Dota 2 Minor with $US400,000 prize pool 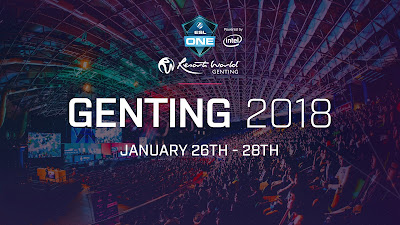 It's back!
Following the success of ESL One Genting 2017, Resorts World Genting is proud to be the host venue sponsor for the second year running. ESL, the world's largest company, will kick-off the new year with an event from its flagship series ESL One powered by Intel, once again bringing the world class competition to the Arena of Stars at Resorts World Genting, Malaysia. ESL One Genting 2018 will take place on January 23-28, 2018, and marks the third official Minor tournament of the year, as the top 16 Dota 2 teams will not only battle over a prize pool of $US400000 but also for 400 coveted Qualifying Points that are collected to determine the eight direct invites to The International 2018. Out of the 16 participating teams, the world’s best will receive a direct invite to take part in the group stages of ESL One Genting 2018. The other remaining spots will be filled with the winners of the regional qualifiers that are being held all over the globe. Prior to the grand finals, which will be played in the Best of 5 (Bo5) format, the quarterfinals and semifinals will be played out in the Best of 3 (Bo3) format using single elimination.


Two major ESL events, both featuring the multiplayer online battle arena game Dota 2, have already been held in Southeast Asia: ESL One Manila 2016 and ESL One Genting 2017. Earlier this year, more than 5,000 fans attended ESL One Genting 2017 on each of the three main event days, whereas over 11.4 million viewers consumed around 4.5 million hours of content online. The two teams Newbee and Digital Chaos fought their way up to the Grand Finals, delivering some tough and thrilling matches. At the end, it was Digital Chaos who took home the ESL One trophy and US$125,000 in prize share.

According to the latest studies of the international market research company Newzoo, the Southeast Asian region is expected to grow up to 16 million esports enthusiasts, which concludes to an esports audience of 33.8 million (including occasional viewers) in 2018. Southeast Asia marks the fifth largest region considering the number of esports enthusiasts of which the majority, in particular 38% is playing Dota 2, followed by League of Legends with 32% and Counter-Strike: Global Offensive with 29%.

Ticket sales for ESL One Genting in Malaysia start on Thursday, October 19 at 2pm MYT / 8am CEST / 11pm PDT. There will be a ticket for everyone, including Weekend Tickets, Plus Tickets and Premium Tickets that range in price from RM180 to RM620. Further information about each ticket type can be found directly here.

Posted by elanakhong at 9:30 PM

Email ThisBlogThis!Share to TwitterShare to FacebookShare to Pinterest
Labels: Dota, ESL One, even, Resorts World Genting