Siemens To Invest Eur 100 Million and Empower Digitalization In Malaysia 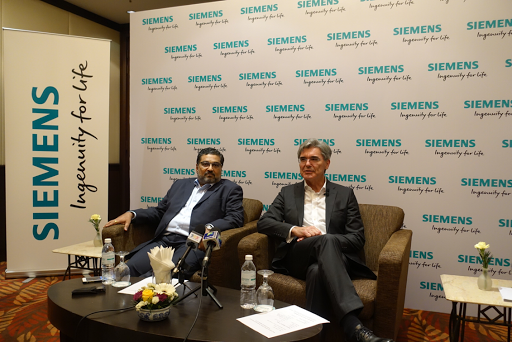 Mr Joe Kaeser, President & CEO of Siemens AG announced on Friday that Siemens has decided to invest EUR100 million worth of software grant to local universities and colleges to boost re- and increase training capability in preparation for the next industrial age in Malaysia. Also present at the press conference held in Hotel Eastin, Petaling Jaya was Siemens Malaysia President & CEO Mr Prakash Chandran. The software grant, which is set to empower Malaysian university students on , was announced following a high-level meeting and courtesy call paid to the Prime Minister of Malaysia Dato' Seri Najib Tun Razak, the Minister of International Trade & Industry (MITI) II Datuk Seri Ong Ka Chuan and the Minister of Transport Datuk Seri Liow Tiong Lai on 13 April 2017.


“We offered to the Prime Minister yesterday that Siemens can provide first-class help  establishing software tools for the industrial Internet to be applied to areas of manufacturing like Industrie 4.0, and will willingly grant the sum of  of software to universities and colleges so that  generation can learn to simulate in the virtual world of manufacturing,” said Mr Kaeser.

Siemens is well positioned to provide the solutions needed to meet the requirements of tomorrow, in line with the Prime Minister’s new 30-year transformation plan, Transformasi Nasional (TN50) which is to strengthen the digital economic hub in the country by bringing the  global network of innovations and the local ability to provide the full spectrum of services in three core competencies / portfolio of , Automation, and Digitalization.

“We see lots of good opportunities in Malaysia to further expand our resources. With the Prime Minister, we also discussed the future of the country and the digital age of how the whole industrial revolution is going to be implemented in this country, and ways on how Siemens can partner leading customers and leading universities to help embrace the Fourth Industrial Revolution. As you know, Siemens is a world leader in manufacturing and automation, and the biggest supplier of industrial software with revenue of about EUR5bil. As  is our new focus, we believe it’s important to invest in software skills to train the students in the next generation of ,” said Mr. Kaeser, who also revealed that Siemens Malaysia made EUR879 million in revenue in 2016.

According to Mr. Prakash Chandran, President & CEO of Siemens Malaysia, since their presence here in Malaysia for more than 100 years now, they ensure support is provided where it is needed the most - including providing access to education, state-of-the-art technology and sustaining communities. Siemens invests about 6% in research and development every year, and the state-of-the-art technology, be it with the MRT, LRT double-tracked rail projects. Going into the market their best competitive basis, Siemens has been ever ready to work hand-in-hand with the government by bringing in the kind of differentiation and assist Malaysia in achieving double-digit growth.

Siemens will also focus on developing even more efficient mass mobility as well as smart grid opportunities to increase national electrification coverage with new generation capacities through efficient alternative solutions aided by digital intelligence.
Posted by elanakhong at 9:54 AM