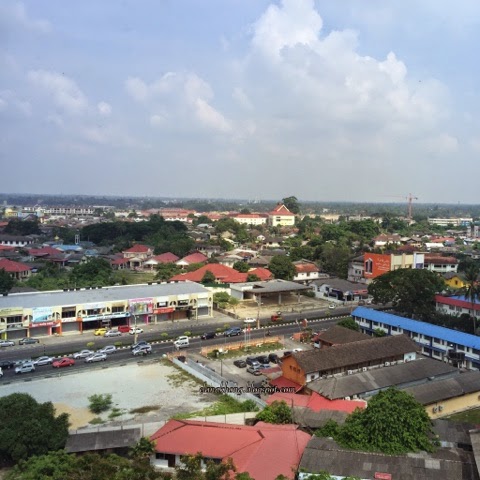 Kota Bharu in the morning. Ohhh... I can't help missing this view from my room at the Hotel Perdana, Kota Bharu. My 2nd day in Kota Bharu kick-started with an early morning breakfast by the pool at the Cerana Coffee House. 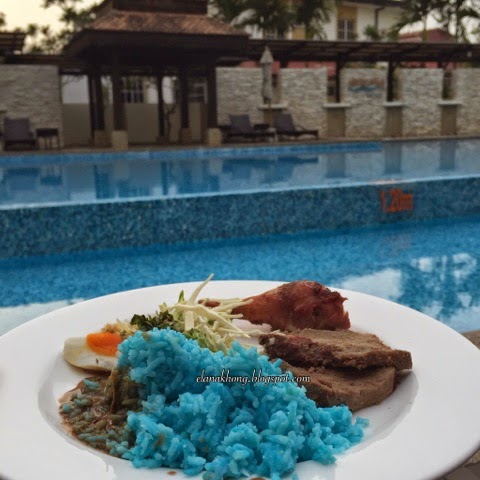 My choice of breakfast was Nasi Kerabu with budu and roasted meats. Why is the rice blue in colour? Well, it is due to the usage of a tint taken from 'bunga kembang telang'(blue pea flower). It is also my very first time eating budu. It's a tad salty but eating it with the Nasi Kerabu makes it just perfect. It's so tasty that I almost went for another helping. 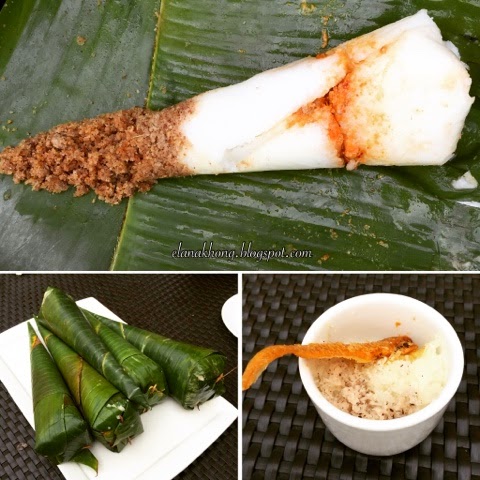 Another Kelantanese delicacy I tried was the Nasi Tumpang  which consisted of layers of rice filled with 'serunding' and curry prawn. Nasi tumpang is known for its packaging as you can see in the photo above. Once you open up the banana leaf packing, you'll see the cone-shaped rice and its condiments. Another yummy choice of breakfast. The salted fish with glutinous rice is also an interesting menu. Its combination of rich flavours will leave you either wanting more or prepare to run away from the buffet for wanting more.
With our full tummies, we began our Perdana Trail adventure. What better way to burn the calories we piled on over breakfast than a nice long walk around Kota Bharu. Hotel Perdana Kota Bharu's General Manager En Muhammad Taha Zainal initiated the "Perdana Trail : A Heritage & Historical Walk" programme to allow the hotel guests learn more about the culture, heritage and history of Kelantan. The trail invites guests to explore Kota Bharu's waiting-to-be-discovered hotspots on foot. 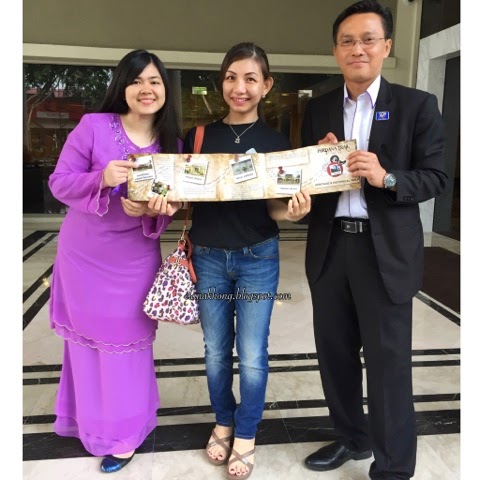 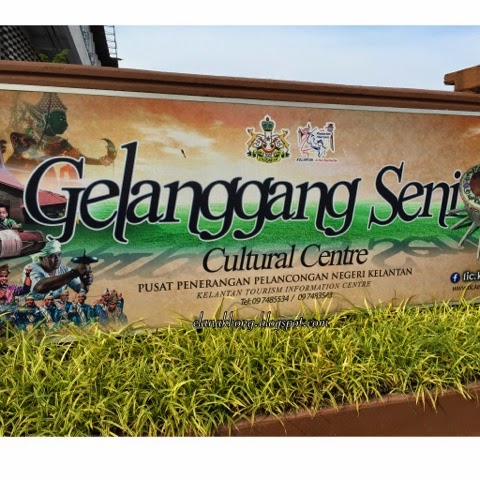 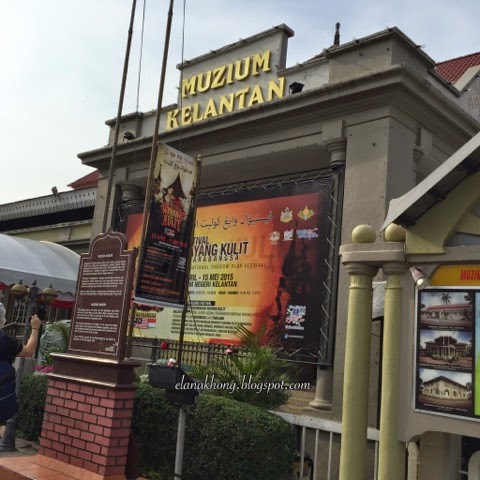 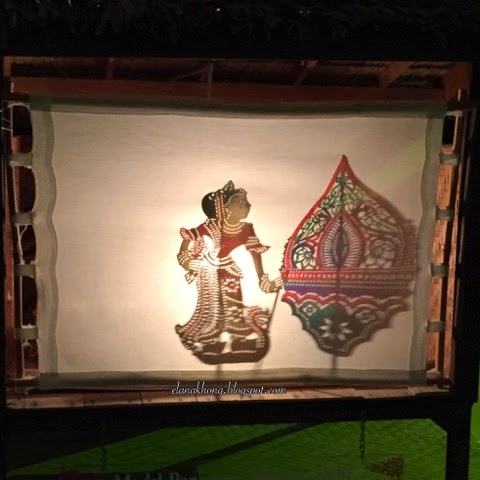 The Kelantanese are very proud of their special Malay shadow puppet theatre called wayang kulit. The puppets are made from buffalo hide and mounted on bamboo sticks. They are held up behind a white screen which is placed in front of a light source, so you only see the shadows performing on the white cloth screen. The show is accompanied by music performed with the serunai, or flute, providing the melody. The Tok Dalang is the master of narration who will tell the stories of kings, warriors and adventures in the original Kelantanese dialect. 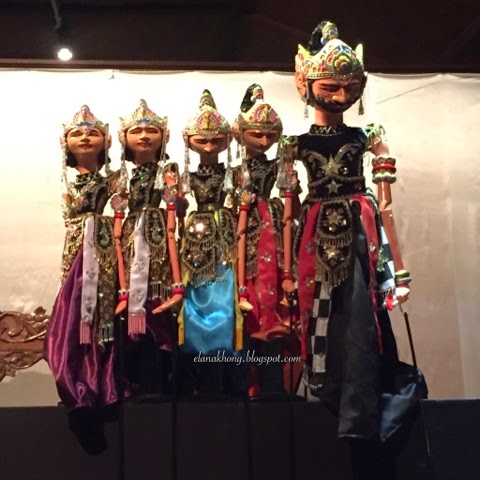 More puppets.... This is Wayang Godek, another type of puppet which is more commonly performed during the day as it does not require light as compared to Wayang Kulit. 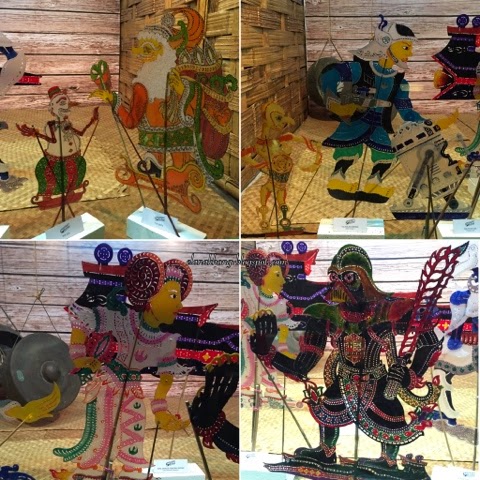 When the East meets West.

These Star Wars themed puppets definitely caught my attention. Haha... I'm so in love with Darth Vader’s puppet that if they were selling it, I would have bought it! In the Peperangan Bintang (Star Wars, get it?) show, Darth Vader's character is renamed Sangkakala Vedeh. 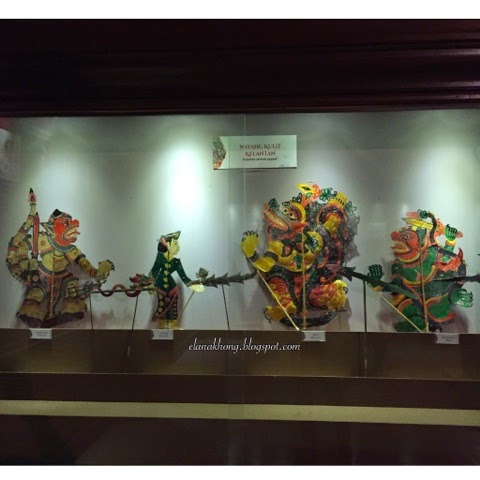 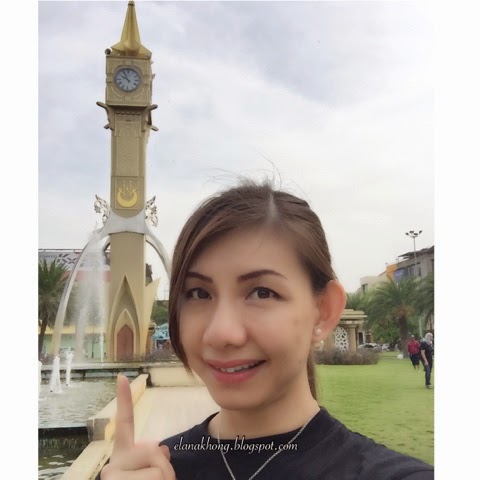 Next, an obligatory tourist pic at the Bulatan Menara Jam Kota Bharu. The clock tower and the monuments are representatives of Islamic architecture and design. There's also a rehal monument, which is a Quran book stand used for placing the Quran for reading. 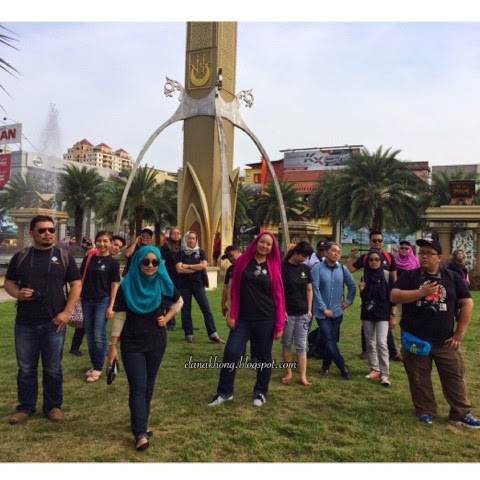 With the gang aka mafia style. 😅 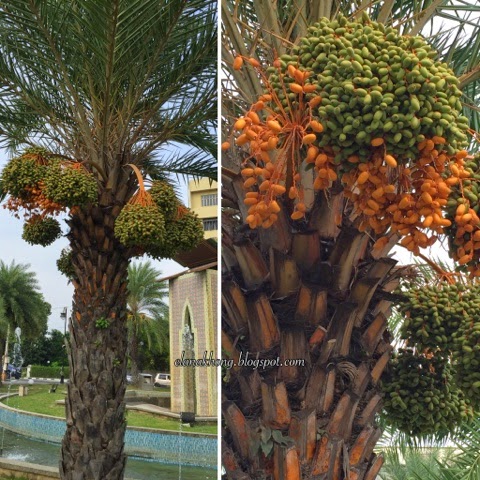 And look what we found...... There are over 30 date trees here, and all of them are beginning to bear fruits. Well, these date trees don't usually bear fruits outside of its natural habitat but surprisingly last Ramadhan in 2014, almost all the date trees bore fruits. Let's hope these dates will be ripe enough for harvest this coming Ramadhan. 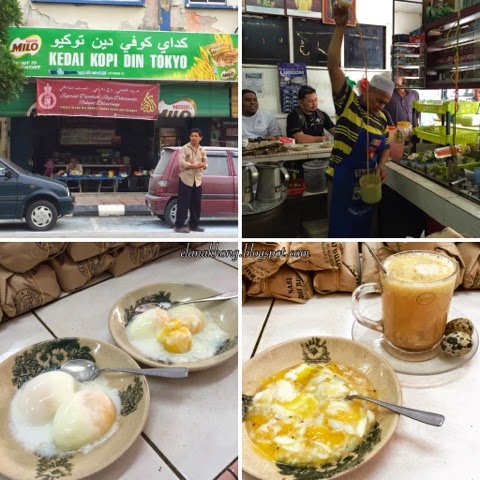 It's time for tea break! We make a quick stop at the local coffee shop 'Din Tokyo' along Jalan Tok Hakim to tried out its signature 'Teh Halia Burung Puyuh(Tea with Quails Eggs) Some who are new to this may feel a little grossed out, but I was totally in for a taste bud adventure.
We were warned during the Media Briefing of all the Foodgasm Fear Factor throughout the trip and it turned out, it was not bad at all. I quite enjoyed the taste, a combination of home made ginger powder and fresh quail eggs. I was informed, Pak Din usually spends about a week to prepare his home-made ginger powder for every batch.
We also had 'Telur Taliban'(Half boiled eggs) and 'Telur Ping Pong'(3/4 boiled eggs)
Seriously they were tasty and good! Best of all, watching Pak Din showing off his tea pulling skills is totally entertaining.
Watch the video here :
https://instagram.com/p/2i3QhGSbdS/ 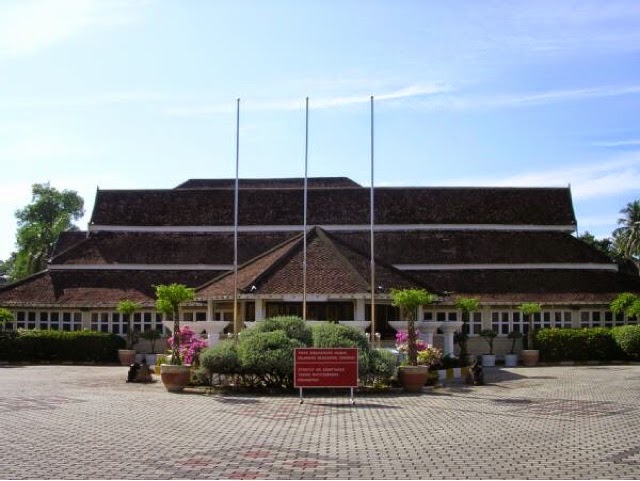 Pic from source.
Istana Balai Besar, Kota Bharu(The Grand Palace) built using wood, furnished with unique wood carvings is a single storey palace built by Sultan Muhammad II over 170 years ago, as the official residence of past sultans.
These days, the palace is only used for official state functions. It houses the royal throne and the royal regalia of Kelantan. 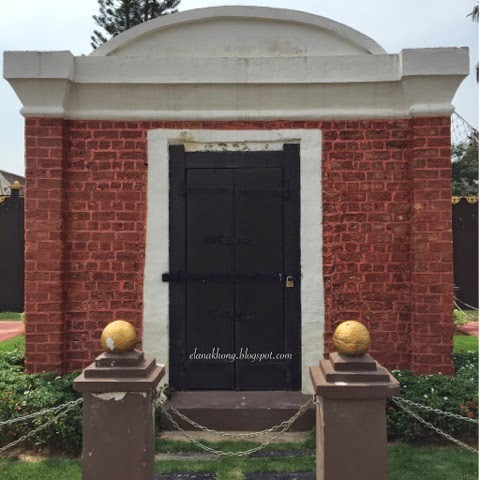 Bank Pitis is the oldest building built from the administrative rule of Sultan Muhammad III. They kept the government's money in this building measuring approximately 12 feet in height and 12 feet width. Pitis was the old currency used in the state. In Kelantanese dialect, it is pronounced as "Pee-teeh". 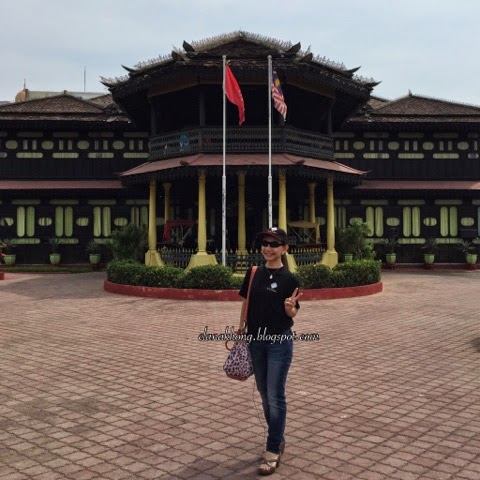 Istana Jahar(Jahar Palace) is a museum of royal customs of Kelantan since July 1992. It was the Royal Residence, built by Sultan Muhamad II in 1887 for his grandson Long Kundur. It has luxurious woodcarvings that showcase excellent Kelantanese craftsmanship. The museum displays photographs, artefacts and traditional handicraft reflecting Kelantan's rich and sophisticated heritage. 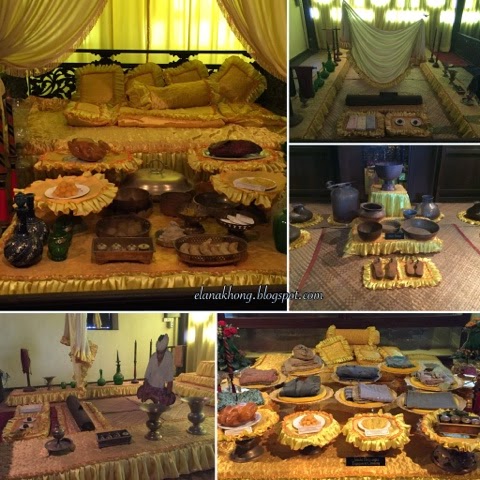 Some of the traditional rituals... From marriages, to birth of children and to the burial ritual upon the passing of the person. 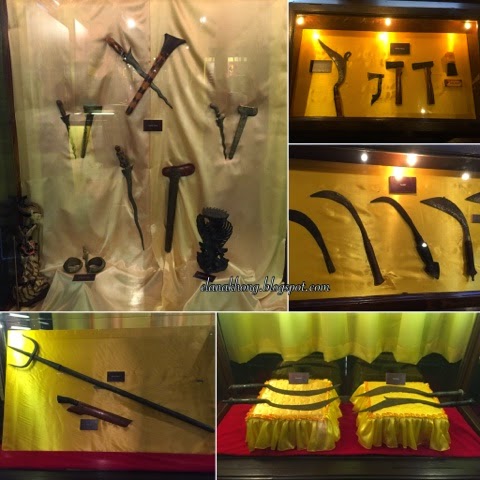 Malay Weapon Gallery showcase many traditional weapons such as keris and parang. If you think you've seen it all, well, you might be surprised to see the different designs and materials to make the weapons. 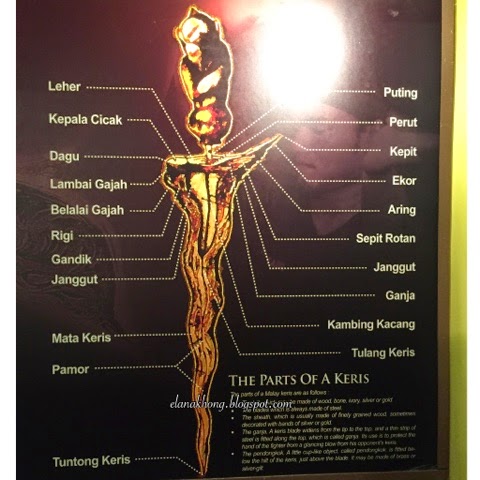 I was surprised to know that every inch of a keris has its own name, similar to the body parts of a human being.
Will continue with part 2 of Perdana Trail adventure in next post. Till then, XOXO!
Posted by elanakhong at 4:09 AM