As promised, here is the continuity to my Perdana Trail adventure in Kota Bharu, Kelantan. 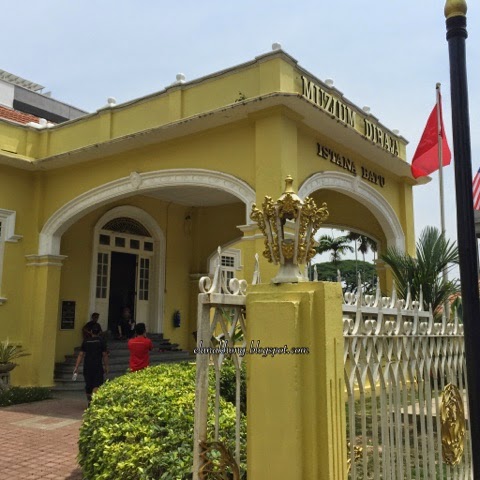 The Royal Museum(Istana Batu) looks striking in yellow, the colour of royalty. This building was built in 1939 as one of the Royal Residences but now functions as museum to display the Kelantan Royal Family personal collection such as gifts, paintings and souvenirs. Let's catch a glimpse into the past royal life here. 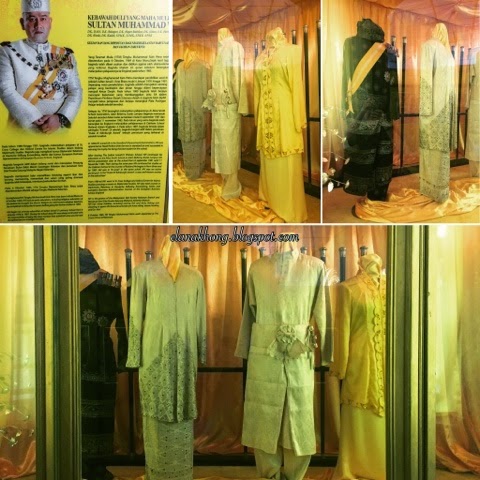 The royal attire worn by the Sultans, Prince and Princess made from songket. Songket is a luxurious, traditionally handwoven textile often associated with Malay royals. It is hand woven in silk and intricately patterned with gold or silver threads. The metallic thread stand out of the crowd with its shimmering effect. Songket also carries a rich cultural and visual profile which makes it rare and inimitable. It takes almost a month to produce a songket. 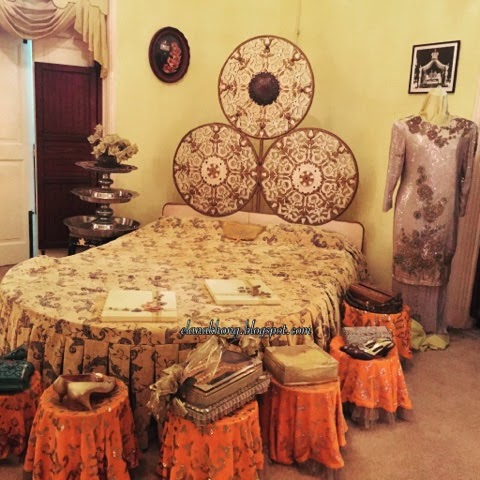 Another section of the museum is dedicated to the current Ruler of Kelantan, Sultan Muhammad V. You can see his activities as a "Pemimpin Berjiwa Rakyat" captured in photographs. The young sultan is often seen with his subjects during his 'mencemar duli' visits to see the people of Kelantan including at mosques and villages. 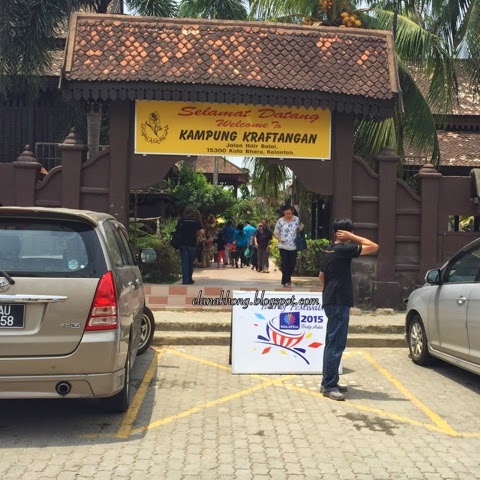 Next, we stop by the Handicraft Village. You'll find lots of local handicraft like traditional embroidery, batik, wooden carvings and silverware sold here. On top of that, you can also buy T-shirts and key chains for friends at work too! Find something that says, 'The Red Warriors' perhaps for avid football fans? Gomo Klate Gomo! 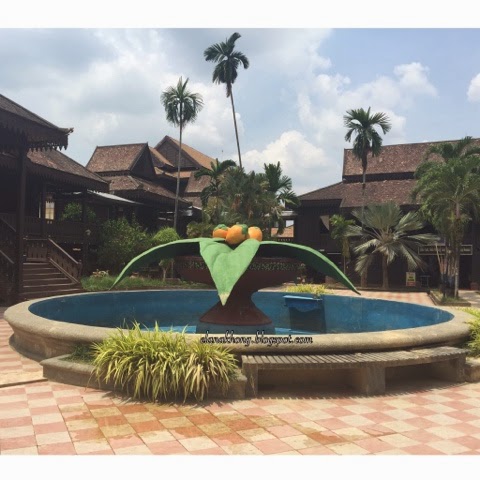 Inside the Handicraft Village, you will find this huge fountain with the shape of 'sirih' tray. On top of it, are the buah pinang(betel nut) which commonly complement the sirih leaves. These replicas are a representative of traditional Malay 'tepak sirih' which was a common sight at kampung homes back in the days. Today, 'tepak sirih' is used as part of wedding gifts or hantaran perkahwinan as a symbol of prosperity. 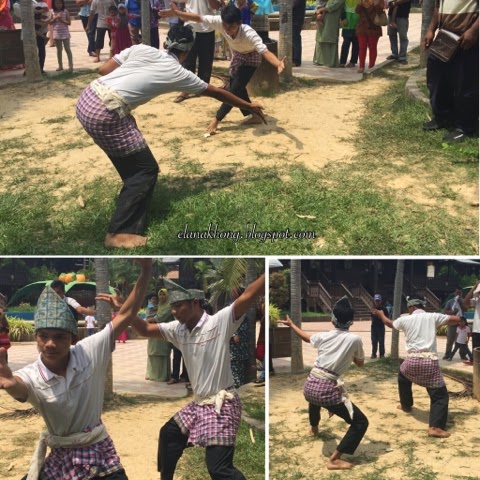 Lucky for us, we had the chance to catch some traditional performances including
Silat, a type of Malay martial arts. I was informed that there are more than 300 types of silat practised in Malaysia. The most famous ones are Silat Gayung, Silat Lincah and Silat Cekak. This art is not only performed for combat, it's also can be transformed into a folk dance. The silat performance was also accompanied by traditional music, led by a serunai(traditional flute) musician. 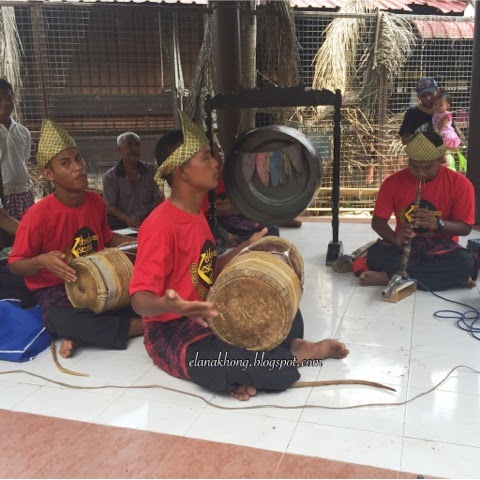 Rebana Ubi is a type of traditional musical culture synchronized rhythmic beating of the Malay drums.

Watch the video at : https://instagram.com/p/20JZbOybQu/

Finally, it's time for lunch at the local popular eatery Nasi Ulam Cikgu. The restaurant is located right underneath the Muzium Kraftangan itself. You can see many people sitting at their tables enjoying a colourful selection of foods.

We had the privilege of sitting in the air-conditioned room along with other customers. Puan Nik Adura, the MarComm Manager of Hotel Perdana, Kota Bharu showed us the proper and traditional way of eating in Kelantan. She mixed the budu and some tempoyak into a plate along with other condiments such as cili api, onions and lime.

It wa indeed one of the best lunch we've ever had. From the piping hot white rice, to the fresh greens of ulam-ulaman.... and yes, the super delicious side dishes. 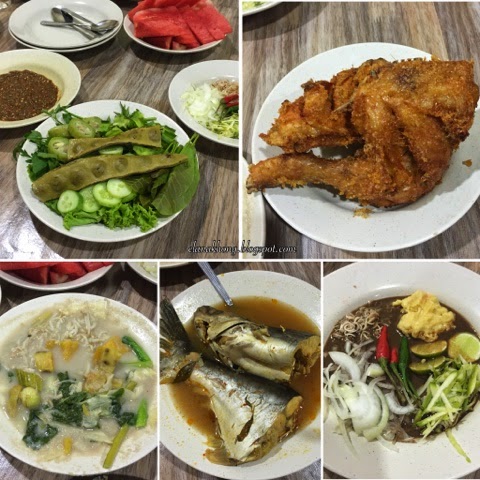 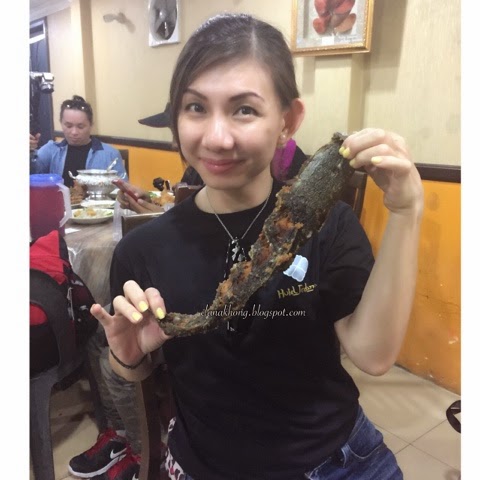 The highlight of Nasi Ulam Cikgu. Gigantic fried snakehead fish. Super crispy outside yet so soft and moist inside. So delicious! By the way, some of our blogger friends conquered their fear for the snakehead fish by eating (and enjoying) it for the first time in their life! Now, that's what I call Fear Factor Kelantan!

Suprisingly, the total bill of our lunch was just slightly over RM200 with free refills of cold beverages too. Can we get such a great lunch in KL at that price? I highly doubt it! 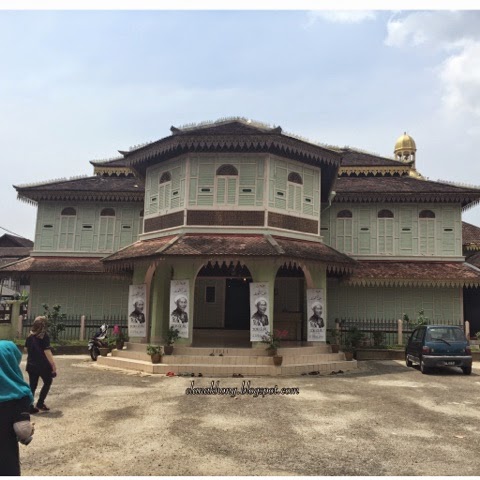 Balai Syura (Islamic Museum) is Kelantan's first Islamic school. You can view a wide collection of Islamic art and crafts, photographs of the artifacts of Prophet Mohammed here. With its building displaying traditional architecture with a touch of Islamic Arts, one can easily understand the meaning of 'Serambi Mekah' or 'The Veranda of Mecca'. 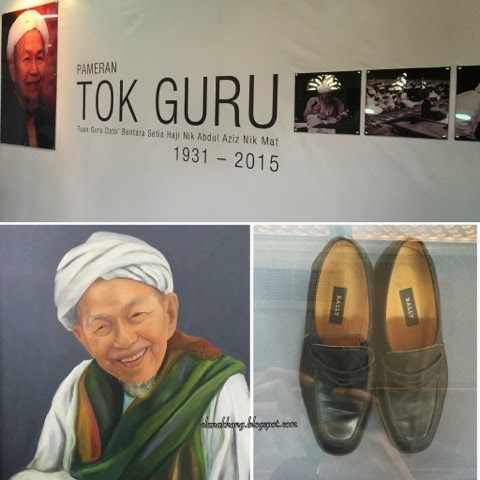 During our visit, there was an exhibition specially dedicated in the memory of Tok Guru Datuk Nik Aziz. Well respected by the Malaysian especially Kelantanese, Tok Guru Datuk Nik Aziz has helmed the Kelantan state government for 23 years. Here one also learned that traditionally, the past rulers of Kelantan was often accompanied by a religious teacher called 'Tok Guru' as the main advisor. 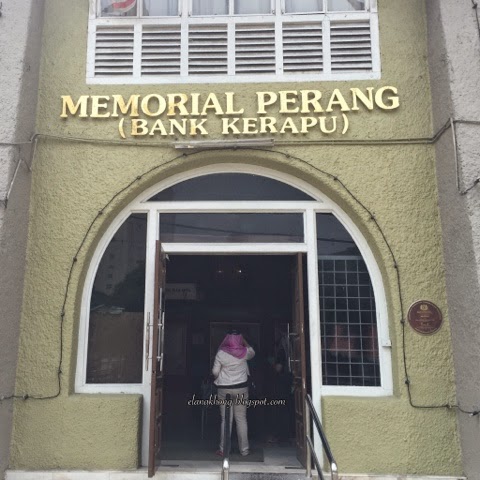 The War Memorial Museum(Bank Kerapu). Bank Kerapu is a historic building located in the downstream side of Padang Merdeka, Kota Bharu. This building, built in 1912 was first used as a commercial bank and believed is the first building/bank opened in the state. The Mercantile Bank of India Limited, thus the name Kerapu Bank. The word 'Kerapu' refers to the rough exterior walls of the building. During the Japanese Occupation from 1942 to 1945, this building was used as the headquarters of the Japanese secret police, or known as "Kempetai". After the war, the building was reused as a bank. The building was turn into a memorial museum displaying pictures, memorabilia and artefacts of World War II. 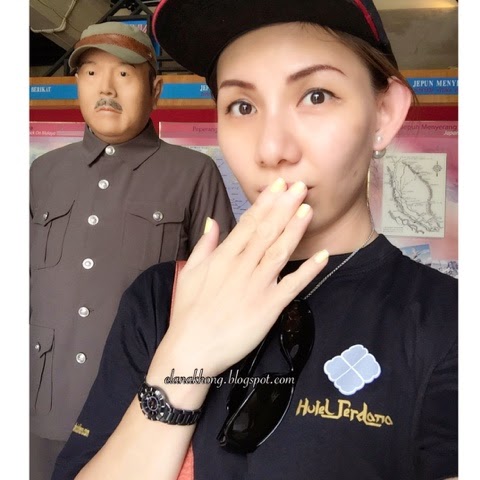 Oppss.... You'll be greeted General Yamamoto upon entering Bank Kerapu.
The wax figurine was so human-like, we thought he looked like one of our blogger friends, Razi. He called General Yamamoto 'Oto-san'(father in Japanese). Hehehe... 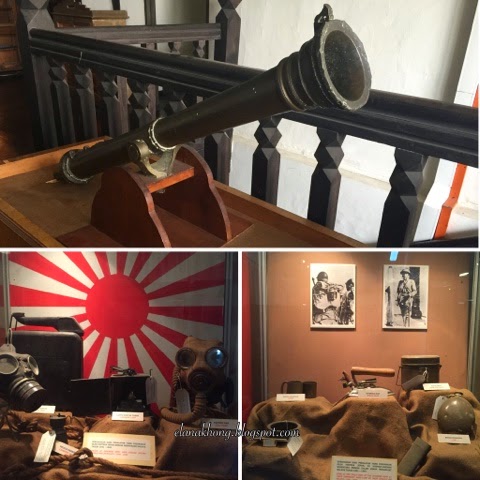 Some of the World War II related exhibits there send shiver down our spine as we thought of all the suffering our ancestors went through during that time. As what we have seen in the movies, food was extremely scarce. People were impoverished and malnourished. Those who were accused of being a traitor were executed without mercy. Try spending some quality time there and imagine your life in that era. You will realize what a great life you have now compared to the life people had then during World War II.

Right behind the Bank Kerapu, you will see actual war artifacts including a propeller from war ship and a small concrete room which resembled a bunker.

That was the end of our Perdana Trail.
After many hours of walking and exploring, discovering sights so new yet fascinating to us(especially yours truly as this is my first trip to Kelantan), it was time to head back to hotel.

We were surprised to see Hotel Perdana Kota Bharu has already arranged our transport, beautifully decorated trishaw. Now that to me has somewhat sealed the whole trip. What a way to travel. Although the trishaw was somewhat smaller than the ones you might see in Melaka and Penang, but it was good enough for us. 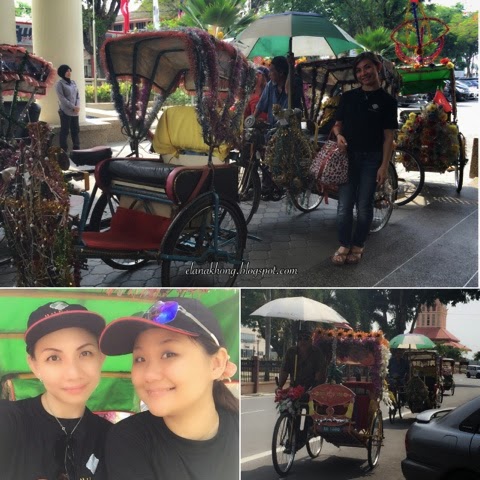 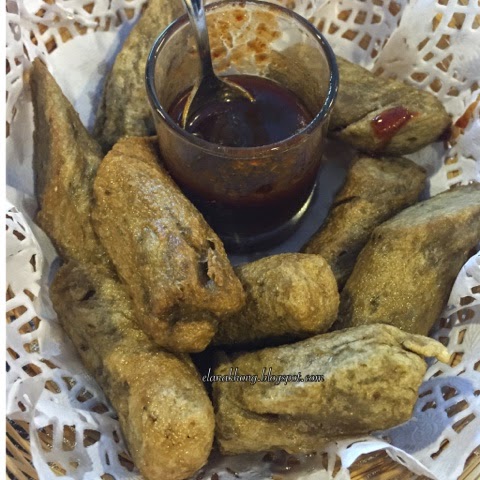 When we got back to hotel, we are treated to a delightful afternoon tea of local favourite snack "Keropok Lekor"(Fried fish cakes) which was pretty addictive. Just dip the hot keropok lekor into the chili sauce and enjoy.... 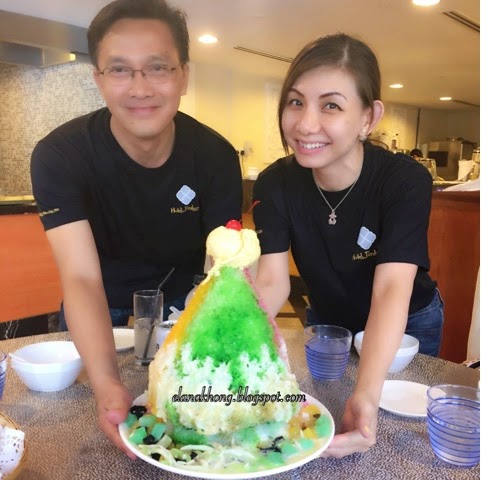 Indulging in this huge ABC after a blazing hot day outside feels like heaven. This huge ABC only cost RM18 with generous assorted condiments and a big scoop of ice cream with cherry on top at Cerana Coffee House. 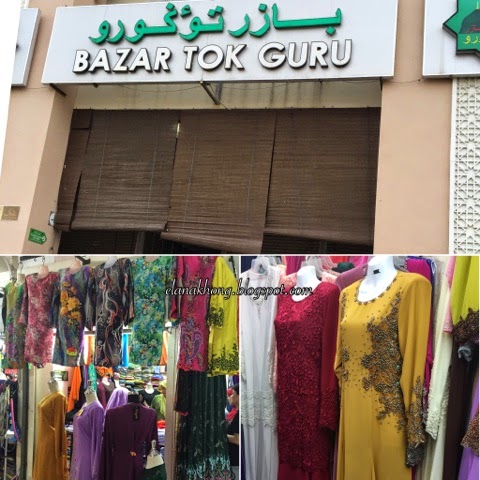 Since Wendy my roommate needed a traditional wear for Perdana Trail official launch, we headed out to the Bazaar Tok Guru to hunt for traditional wear. Wendy able to find herself a nice baju kurung for only RM80 after some bargaining. Sadly, I don't get to buy, as the design I like is out of my size. Geez...

Till then, stay tuned as I will share with you the official launch of the 'Perdana Trail'.

Posted by elanakhong at 8:59 AM